Functioning of the Domain Name System

This article covers the basic functions of the Domain Name System (DNS) to provide name resolution services to clients.

Domain Name System (DNS) is the default name resolution service used on the Internet respectively on TCP/IP based communication networks. DNS is part of the TCP/IP protocol suite. All TCP/IP network connections are, by default, configured with the IP address of at least one DNS server in order to perform name resolution on the network.

DNS originated in the early days of the Internet when the Internet was a small network. The host names of the computers in this network were managed through the use of a single, centrally managed HOSTS file. Each site that needed to resolve host names was forced to use this file. As the number of hosts on the Internet grew, the traffic generated by the update process increased, as well as the size of the HOSTS file. The need for a new, scaleable and decentralized system became more and more obvious.

The Domain Name System introduced in 1984 became this new system. With DNS, the host names reside in a database that can be distributed among multiple servers, decreasing the load on any one server and providing the ability to administer this naming system on a per-partition basis. DNS supports hierarchical names and allows registration of various data types in addition to host name to IP address mapping used in HOSTS files. Because the DNS database is distributed, its potential size is unlimited and performance is not degraded when more servers are added.

The Internet Domain Name System is managed by a Name Registration Authority on the Internet, responsible for maintaining top-level domains that are assigned by organization and by country/region. Top level domain management in Switzerland for example is done by Switch (www.switch.ch).

The DNS domain namespace is based on the concept of a tree of named domains. Each level of the tree can represent either a branch or a leaf of the tree. A branch is a level where more than one name is used to identify a collection of named resources. A leaf represents a single name used once at that level to indicate a specific resource. 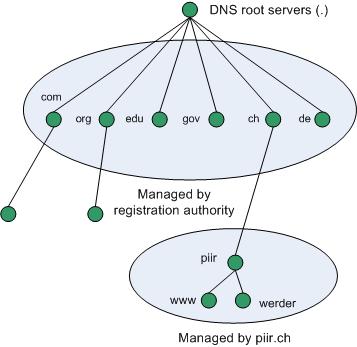 The previous figure shows how piir.ch is assigned authority by the Internet root servers for its own part of the DNS domain namespace tree on the Internet. DNS clients and servers use queries as the fundamental method of resolving names in the tree to specific types of resource information. This information is provided by DNS servers in query responses to DNS clients, who then extract the information and pass it to a requesting program for resolving the queried name. In the process of resolving a name, keep in mind that DNS servers often function as DNS clients, querying other servers in order to fully resolve a queried name.

A DNS database consists of resource records (RRs). Each RR identifies a particular resource within the database. There are various types of RRs in DNS. The following table provides information about structure of common resource records.

A zone contains information about all names that end with the zone’s root domain name. Each zone is anchored at a specific domain name referred to as the zone’s root domain. A DNS server is considered authoritative for a name if it loads the zone containing that name. The first record in any zone file is a Start of Authority (SOA) resource record (RR). The SOA RR identifies a primary DNS name server for the zone as the best source of information for the data within that zone and as an entity processing the updates for the zone.

A name within a zone can also be delegated to a different zone that is hosted on a different DNS server. Delegation is a process of assigning responsibility for a portion of a DNS namespace to a DNS server owned by a separate entity.

Multiple zones can represent the same portion of the namespace. We distinguish three types:

The zone transfer is initiated in one of the following ways:

There are two types of DNS queries that may be sent to a DNS server:

When a DNS server processes a recursive query and the query cannot be resolved from local data (local zone files or cache of previous queries), the recursive query must be escalated to a root DNS server. Each standards-based implementation of DNS includes a cache file (or root server hints) that contains entries for the root DNS servers of the Internet domains. (If the DNS server is configured with a forwarder, the forwarder is used before a root server is used.) 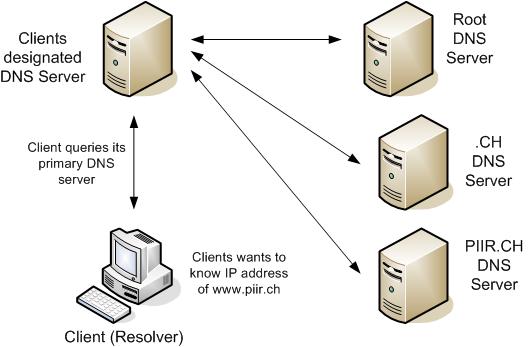 An iterative query is one in which the DNS server is expected to respond with the best local information it has, based on what the DNS server knows from local zone files or from caching. This response is also known as a referral if the DNS server is not authoritative for the name. If a DNS server does not have any local information that can answer the query, it simply sends a negative response. A DNS server makes this type of query as it tries to find names outside of its local domain(s) (when it is not configured with a forwarder). It may have to query a number of outside DNS servers in an attempt to resolve the name. 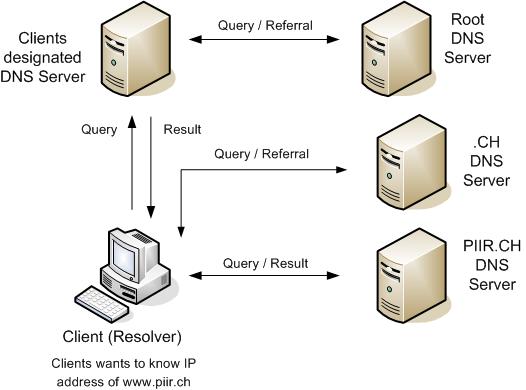 Time to Live for Resource Records

A DNS client resolver caches the responses it receives when it resolves DNS queries. These cached responses can then be used to answer later queries for the same information. The cached data, however, has a limited lifetime specified in the TTL parameter returned with the response data. TTL ensures that the DNS server does not keep information for so long that it becomes out of date. TTL for the cache can be set on the DNS database, per zone through the minimum TTL field of the SOA recordb as well as on the DNS client resolver side by specifying the maximum TTL the resolver allows to cache the resource records.

The two competing factors to consider when setting the TTL are 1: The accuracy of the cached information and 2: The utilization of the DNS servers and the amount of network traffic. If a query is answered with an entry from cache, the TTL of the entry is also passed with the response. This way the resolvers that receive the response know how long the entry is valid. The resolvers honor the TTL from the responding server; they do not reset it based on their own TTL. Consequently, entries truly expire rather than live in perpetuity as they move from DNS server to DNS server with an updated TTL.